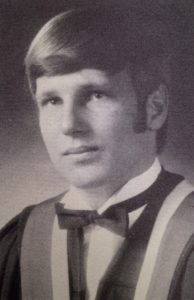 The 5’ 9” sharpshooter from Stearns High School set scoring records that still stand fifty years later. Steve was a first team All- state selection his senior season and regularly scored over fifty points per game his senior season. He still holds Stearns season average scoring leader even though he played at a time before the three- point shot. After high school Steve attended Acadia University where he ended his career as the all time scoring leader. He also led this university to the Canadian National Championship. After college Steve played a season overseas in England where he averaged over 38 ppg. The name of Steve Pound is synonymous with excellence in Maine basketball.