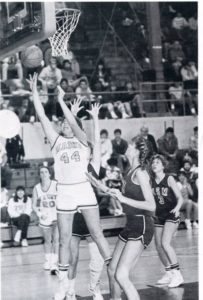 Liz Coffin from Portage Lake, Maine established herself as one of the greatest female athletes in the state’s history while leading the University of Maine to new heights in the early 1980s. She once scored 53 points in a single game in high school but it wasn’t until she played in college that her game went to a new level. She holds records for most rebounds in a season ( 380) and in a career ( 1351) and her 2153 career points ranks fourth in team history. In 1988 she was named Player of the Year for the Seaboard Conference and is the only player ever to score more than 2000 points and bring down more than 1000 rebounds in a career. Her uniform number was retired by the University of Maine in 1988 and she belongs to the UMO Hall of Fame.