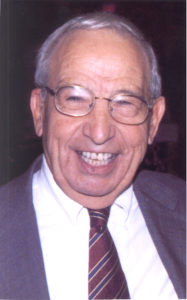 John “Swisher” Mitchell was one of the best point guards ever to play in Maine. His Waterville High School teams on the mid 40’s compiled a record of 70-2 and won both the Maine and New England Championships in 1944. John was a forerunner of the Bob Cousy style of play. Exceptionally quick and hard to contain, John drove opposing teams crazy with his vision, ball handling skills, and ability to score. After high school John attended University of Rhode Island where he was an All-Yankee Conference selection two years and an All New England and All Boston Garden selection his senior year. Swisher returned to Waterville and served as Dick Whitmore’s assistant coach at Colby College for nearly forty years.