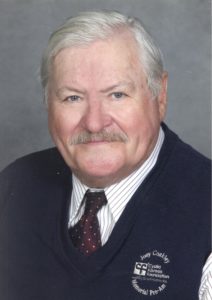 John Edes is a graduate of Ellsworth High School where he led his Eagles to the finals of the New England Championships in front of 13000 fans at the Boston Gardens. While his team lost to Hillhouse 54-53, John scored 27 points and finished with a career point total of 1227. He was an All-Maine selection in 1952,’53,’54 and an All-New England selection in 1954. John continued his basketball career at Colby College where he established himself as one of the Mules greatest players