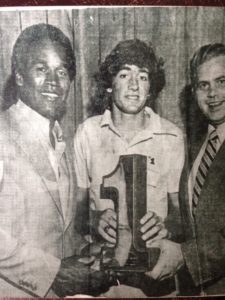 Gary Towle led Cony to the State Championship in 1978 when his team went 22-0. Towle scored 101 points in the Eastern Maine tournament, finishing with 38 points against Presque Isle in the finals. In this tournament, Towle shot 63% from the floor; and scored 54 points against Bangor in a regular season game. He was a first team All-State selection. After high school, this prolific scorer took his skills to Providence and Assumption Colleges.