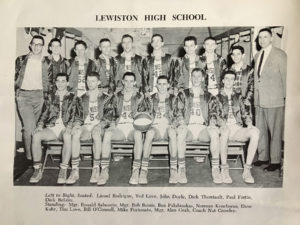 Prior to 1962 the New England Basketball Championships included all six state champions.
Connecticut was the first state to pull out in 1962, but before this happened a group of
outstanding athletes from Lewiston High School rolled into the Boston Garden after defeating
Brewer High School 81-64 for the Maine State Championship.
Lewiston was led by John Doyle, Paul Fortin, and Dick Terriault, all members of the1960 BDN
All-State teams. Playing a high- octane brand of basketball, the skill level Lewiston displayed
was equal to any group of players in Maine history. Their magical season resulted in a 24-
0 record as they represented Maine in the New Englands.

Although Wilber Cross of Connecticut defeated the Blue Devils, the 1960 Lewiston team
secured its place in Maine folklore as one of the best teams ever to represent the state.
They are being inducted into the Maine Basketball Hall of Fame today; joining their rightful
place in our state’s historical record.